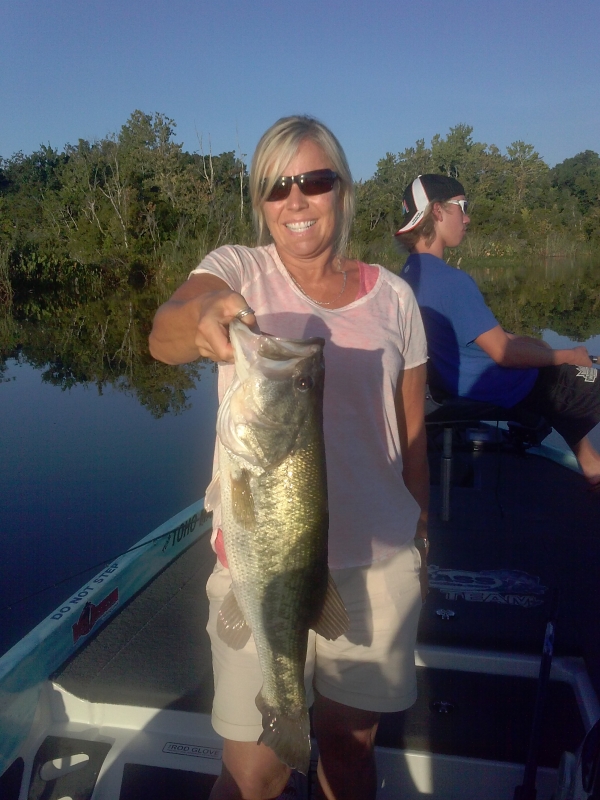 Had out Trudy Wilson at her son Nolan today from Canada. There’s another hot summer day, but luckily we had a good (5) five or (10) ten miles an hour breeze. We were fishing out here in Central Florida on the famed Lake Apopka. It was a good day,  it was a (4) four-hour trip. We used all live-bait, started out with corks in the morning and as the day progressed sort of got harder. The water temperature right now is starting in the high (70’s) seventies and, slowly progressing in to the low (100’s) one hundreds. So that’s be good increase in temperature throughout the day here in this hot Florida summer temperature’s.

But lucky here in the place where we’re at right now the fishing has been pretty steady throughout the day. We were able to catch (12) twelve or (13) thirteen good bass with our largest being just over (5) five pounds and the next one being just over (4) four pounds. That Trudy was able to pull in today, we if we could hook up on everything probably could have had (16) sixteen or (17) seventeen bass in the boat. Not on that day here in the Florida summer!

So til next time, Capt Tony Summers…fish on!